Spiny dogfish have a long slender body with 2 dorsal fins almost equal in size.  The pelvic fin on the underside is positioned between the 2 dorsal fins and the anal fin is absent.  The jaw is filled with small teeth.  The teeth’s points are bent toward the rear of the mouth and are positioned closely together to form a continuous cutting edge.   A spiracle or air hole is positioned behind the relatively large eye.  Their coloration is gray along the back fading to pale gray with a white belly.  Young spiny dogfish have numerous white spots along the back.  There is a spine at the start of each dorsal fin, glands at the base of the spines secrete a mild poison.  Life span is estimated to be more than 100 years!

They are readily caught on top and bottom rigs, striped bass or bluefish rigs.  They will hit cut bait, squid, crab, fishbites, bloodworms.  They will eat just about anything and when they are in the area you may spend all day pulling these fish in to the surf.  They are found up and down the East coast.    In many countries they are used as food.  In England dogfish are sold in fish and chip shops as “rock salmon” or “huss”, in France it is sold as “small salmon” (saumonette) and in Belgium and Germany it is sold as “sea eel” (zeepaling andSeeaal, respectively). 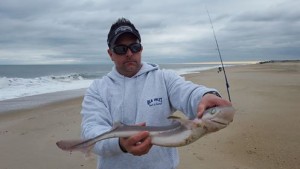